Who is playing Stupid : A Religious World View

On a Newspaper:
"Violence erupted in Pakistan on Wednesday as more than 70,000 people joined Pakistan’s largest protest yet against the Muhammad cartoons.Gunfire, rioting, and torching of movie theaters, a KFC restaurant, and a South Korea-run bus station took place
" news at christianpost

Another bullshit by religious people in Pakistan. They came out on streets to condemn blasphemous cartoons printed on some alien places like Denmark or Sweden. Every time these creatures come out on streets and they burn motor cycles and cars of their fellow country men. They believe that these acts of violence will stop Europeans by drawing more cartoons. These are nothing but stupid acts of ignorant people.

Their stupidity does not stop there, They are the people who never came out against terrorists who are doing all the brutalities in the name of Islam. These terrorists are the real shame for Islam and for Muhammad (PBUH). When terrorists blast in a market to kill innocent men women and children they actually deface the Islam and Prophet of Islam. They are kept doing this for many years now and Islamic clerics kept silence or never condemned the way they condemn the cartoons. Few voices rose time to time but majority of Experts and Doctors of Islam have been on the side of Terrorists. Especially in Pakistan most of religious scholars showed tolerance to terrorist acts and provided support to blood hungry terrorists because they were using name of ISLAM.

Most of religious people are hypocrites. They some times condemn acts of terrorism but never raise voices against those wild animals who were on the mission to kill innocent and earn bad name for Islam and Muhammad. They did this just to achieve their vested interests. On the other hand Mullah thought that this might give them chance to establish some theocratic govt. in Pakistan.

JI and JUI(F) are the main culprits who are the strong supporters of Talibans. They now say that they condemn terrorism just because Power corridors are on the other side otherwise we all can see that they never came out on streets against these terrorists as they come out FOR the cartoons.

I used FOR the cartoons because the way they behave in the rallies against cartoons instead of sending any strong message to the world this instigate OTHERS to draw more cartoons and see how we jokers come out to burn ourselves. These OTHERS are not against or in favor of our believes but they enjoy when they see that a cartoon can make this nation of stupids so angry that they start to burn their own assets.

It was time when OTHERS praised our beloved prophet and we felt proud that non believers are admitting greatness of our Holy prophet. Then what happened to those people that now they start to print cartoons and make mockeries for the same person they were used to praise once.... We need to stop and think on it. We need to look within... There is some inside enemy. This is not the Europeans who are making mockeries rather We Muslims are causing to deface the Islam and Prophet. We get hurt in Pakistan when someone prints cartoon on some newspapers in Europe or someone uploads a immature blasphemous film on Youtube but we never get hurt on the group who is claiming to be true Muslims and followers of Sharia and claim to be Muslims Khalifa (Ameer ul Momeneen) and at the same time they are beheading people and playing football with human heads. We never get hurt when this group sends terrorists to blowup the innocent people in the markets. We never get hurt when they shoot the girl in the head just because she was showing determination to get education  anyway and posing challenge to these Killers who claim to be Taliban (The Students of Islam).
We just get hurt when some one see all this and depicts cruelty of our belief system.

FOR GOD SAKE.... Just stop a while and think... who really is responsible for blasphemous cartoons and films? THOSE who just came to know our holly prophet by our deeds OR we are the real culprits who have been supporting Mujahideen or Terrorists who are defacing our beloved prophet? 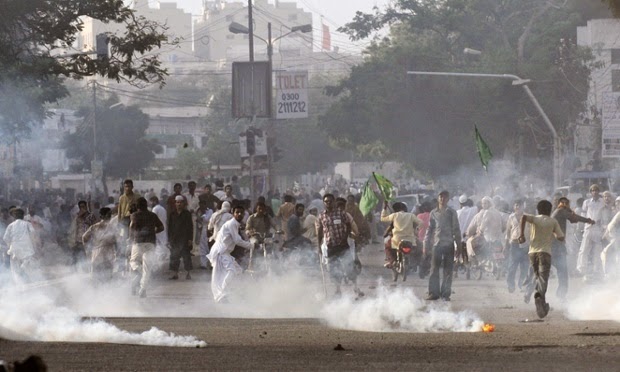